Debi Willis is the founder and CEO of OKC-based PatientLink, a company that creates software solutions for the healthcare industry. Her background and life experiences have shaped her mission in life, which is to give a voice to patients and empower their advocacy of their own healthcare through technology.

“That’s the path I’m on, just trying to weave the patient voice into healthcare,” shared Willis.

One of her applications, MyLinks, allows patients to securely manage all of their medical records in one account that they control, free of charge. Patients can add to it, review it and share it with whomever they wish, regardless of which doctor they see.

If patients have access to their data, they can also understand their health better,” Willis explained. “Nobody is more interested in finding the answer than the person who has the illness or someone that loves them.”

Willis and her team have won several awards for their MyLinks product. One, in particular, was especially rewarding, as it seemed impossible at the time. The government created a contest to see which company could make an application for patients.

The competition was steep, against large tech companies on both coasts with a lot of financial backing. However, their small woman-owned company from Oklahoma beat all odds and won the contest.

“That was a high point and propelled us to do even more. It was like winning the Triple Crown,” Willis shared.

Willis was born into a family of scientists and entrepreneurs and developed a love for learning at a very young age. She believed that you could solve any problem if you could understand it.

While taking a college test to help in determining her future occupation, she found errors within the test itself, which proved to be incredibly instrumental in the projection of her own life’s work. Her test results concluded that she should be one of three options: an astronaut, a ballerina or a computer programmer. She decided to become a computer programmer so that she could make a better test.

After spending her first few years in the banking industry, she learned about a new technology, electronic medical records.

“I like to be on the bleeding edge of something and be presented with a problem and then figure out how to solve it,” she said.

So, she jumped into the healthcare IT field.

Later, devastating personal experiences began to unfold around her. Her sister developed brain cancer, as did two other members of her family. Their family searched for research for answers but found none.

Then her mother developed Alzheimer’s. She had already lost two grandfathers to the same disease.

“We were in the same position as before with my sister. We don’t know how to stop it or slow it down or what starts it. It brought me to the understanding that we need to figure out what’s going on. We lived in a space of time that the knowledge wasn’t there yet,” Willis shared.

Later, while attending a national conference in Washington DC, she found herself amongst a group of women, sharing about similar experiences and the need for research to gather information and share it in a way that could be beneficial for all.

Not long after, Willis developed an unknown illness. It took a considerable amount of time and a change in doctors before a correct diagnosis was made. She had kidney cancer.

“All of those experiences made me feel that the missing piece was not only knowledge but the patient themselves. We’re all in this space where we don’t feel like we have a voice in this arena with all this other noise. It has driven me to continue my passion of getting people involved in their own care,” she said. “Sometimes I run into brick walls and am exhausted by institutional attitudes and then I remember my sister’s face. If we had the collective knowledge and collective passion, we could do something faster together. Together is the key.”

Willis attributes her success to the support of her team and from the love of God. “Everything I’ve ever done from the start of the company to every product I created was done in a very prayerful way, with the opportunity to be guided by God,” she said.

When asked what she wishes she could share with her younger self, Willis said, “When I was growing up my mom told me I could be anything. I naively believed that there would be no barriers. You’re going to find barriers, but don’t be discouraged. Expect barriers. It’s part of human life, but don’t let the walls stop you.”

In discussing her future vision, she wishes for someone to take it to the next level. 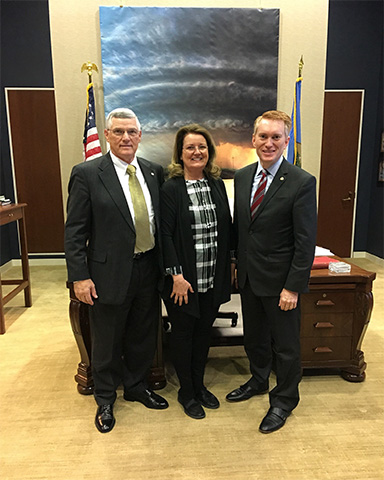 “I’m 65. I don’t want this dream to stall or not reach its ultimate goal. We’ve broken down lots of barriers but there’s a ways to go. I want my children and grandchildren to have the reality of the vision that started this whole thing a long time ago. We don’t know what causes these diseases, but together we can figure it out and do something to make it better.”

Willis is continuing to reach new goals and work on new projects, including a project surrounding the ability to build standards to let patients electronically tell clinics things that are incorrect in med-ical records for accuracy. Her work is ever-growing and ongoing.

She and her husband have seven children, as well as ten grand-children. You can learn more about Willis and her company at mypatientlink.com.